LIFESTYLES OF THE RICH AND FAMOUS: NOT AS LUXURIOUS WITHOUT A WILL

Home/Financial, Probate, Probate Administration, The Probate Pro, Trust, Will/LIFESTYLES OF THE RICH AND FAMOUS: NOT AS LUXURIOUS WITHOUT A WILL

LIFESTYLES OF THE RICH AND FAMOUS: NOT AS LUXURIOUS WITHOUT A WILL

Since the early ’00s, Good Charlotte’s “Lifestyles of the Rich and Famous” has been a championed anthem of the hardworking American people. With the perspective that, “they got mansions/think we should rob them” in mind, it is easy to see how we form the assumption that people of wealth and fame have their affairs in order. However, the probate business is a clean window into the lifestyles of many rich and famous people, and I’m here to tell you that their personal lives are often not as neat and polished as their mansions. Yes, even the most envied celebrities have failed to plan ahead and left a financial and emotional mess for their loved ones — after all, they are only human.

While these are sad and unfortunate realities, we can all gain some wealth of wisdom by learning from their mistakes.

The following is The Probate Pro‘s list of the most famous people who died without a Will. Every week day for the next 10 days, we will be revealing one celebrity from our list.  Any billion-dollar guesses about tomorrow’s celebrity story?

An eccentric billionaire, Howard Robard Hughes Jr. was an American entrepreneur, known during his life as one of the

most famous, financially successful businessmen in the world. Approximately three weeks after Hughes’ death, a handwritten will was found on the desk of an official at the headquarters of the Mormon Church. The Will, however, was proved to be a forgery in a Nevada court. Hughes’ $2.5 billion estate was eventually split among his 22 cousins.

Dying without a Will can also be expensive. When Pablo Ruiz y Picasso died in 1973 at the age of 91, he left behind a fortune in assets that included famous artwork, five homes, cash, gold and bonds. Because Picasso died intestate (without a will), it took six years to settle his estate at a cost of $30 million.

After the singer’s death by alcohol intoxication in July 2011, her parents inherited her entire estate and established the Amy Winehouse Foundation, which continues to work to prevent the effects of drug and alcohol misuse on young people. The Foundation aims to support, inform, and inspire vulnerable and disadvantaged young people to help them reach their full potential.

Nirvana’s front man Kurt Donald Cobain was found dead at his home after falling victim to suicide by a self-inflicted shotgun wound to the head. During the last years of his life, Cobain struggled with heroin addiction and depression. While he found the time to write a suicide note (photo on right), he apparently did not have the time to visit his estate planning lawyer. Without a plan, Cobain left us with only great music and an inspiring quote:

“Wanting to be someone else is a waste of the person you are.”

Robert Nesta “Bob” Marley’s Rastafarian perspective of death and the afterlife precluded him from estate planning. Obeying his religion, Marley intentionally did not leave a Will as his faith did not acknowledge mortality. Marley believed that reincarnation was imminent. 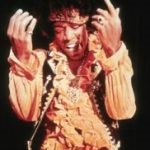 Like Hendrix, Marley’s famous music was extraordinary while his probate estate was a complete mess, all despite that fact that Marley knew he had cancer for nearly 8 months prior to his demise.

The Rock and Roll Hall of Fame described James Marshall “Jimi” Hendrix as “arguably the greatest instrumentalist in the history of rock music.” Although he died in 1970, the battle over his estate carried on for more than 30 years. Hendrix left his estate in a Purple Haze with no Will.

He led the civil rights movement using non-violent civil disobedience and organized the 1963 March on Washington, the site of his famous “I Have a Dream” speech. In that moment, Martin Luther King, Jr. solidified his reputation as one of the greatest orators in American history. But, as I see all of the time, being the greatest of anything does not also mean being a great estate planner. Contradictory to his legacy as the posterchild for peaceful protest, his death brought dividing arguments and strife to his family over the handling and administration of his probate estate.

“And in the end, it’s not the years in your life that count. It’s the life in your years.”

Prince Rogers Nelson recently made headlines when his sister commenced a probate estate claiming after claiming that the entertainer died without a will. His lack of estate planning has caused his entire estate to go to the probate court and through an extensive probate proceeding. With simple estate planning, Prince (and his family) could have avoided this mess.

Much like these legends, it is reported that 64 percent of American adults do not have an estate plan. No, you don’t have to be rich or famous to leave a complicated, financial mess for your family.

It is imperative to plan.

Whether your goal is to achieve privacy, to control the disposition of assets, to minimize taxes, to avoid probate, to protect your assets, to simply give your family peace of mind, or any combination thereof, The Probate Pro is here to help. Call (248) 399-3300 today.